From my experience if you have lever action shocks, at least from the forties and fifties, which have not been used for decades it's best to be prepared to spend much more money than the $160 or so a piece that rebuilds are advertised at. The truth is that for so little money you will only get the seals replaced and that's if your lucky. $160 + for a rebuild might seem like a lot but these shocks are difficult to work on to say the least and unless you fully understand how they work and how they are put together you are undertaking quite a job. Bear in mind that these were none servicable items back in the day and relied upon being maintained with oil. Anyone on the many forums who thinks working on these is a walk in the park is deluded

My advice would be to go to a someone quoting a higher end price, for you at least have a more realistic chance of having a better job done.

I was disappointed in being unable to find anyone over here in the UK who could work on my shocks despite an extensive search online. The guys I found could only work on shocks fitted to British and European marques, so I took the plunge and sent them to the States for a rebuild. Lets face it the shocks had been sitting for decades and what was the point in cleaning and filling them with new oil and hoping for the best?

I worked them on the car so I at least knew that one seemed free, and the other moved but was hard work, so they were freed up not stuck.

I sent them to Cars Inc. where I have bought a lot of parts. They offer several services, including lever shock rebuilds, which they out to a third party. This was back in August 2012 some 2 1/2 years ago. When they arrived with the rebuilder I was told one was stiff and they would do their best. Before they arrived back with me I was told one was stiff but serviceable.

This is a big costly project and time goes by but in storage after a few months the good shock leaks out its oil. When I refit it 2 years after it comes back it doesn't hold oil and it seemed a bit of a waste of time, and the best part of $600 after I paid shipping and import taxes on the 'rebuilds' which cost $139 a piece at that time. I contacted Cars Inc and their guy pointed out its been a while, likewise I pointed out the car is not close to hitting the road yet and that I was shocked the shock was leaking. Anyway he forwarded to their shock guy who said he would replace the seal free if I paid the shipping which is about $100 each way.

However, I was uninspired to remove the shock and send it over, besides I had a shock that was still stiff sitting here also, so a week or two ago I did a big in depth search and trawled the web for someone over here and found someone that could do the job. He goes by the name of Chas Smith, he did a very good job and his contact details are to be found on my " really useful people " page. This takes me to the next stage which is very interesting !!! 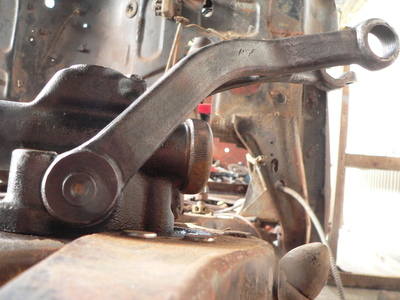 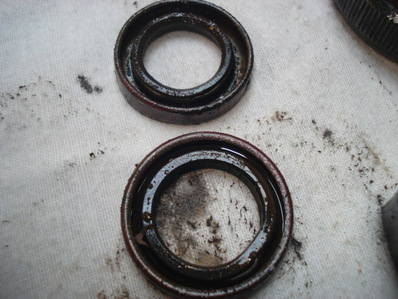 This is what Chas found when he dismantled the first shock absorber. Above pictured one of the lever action shock asbsorbers and the seals removed from the 'rebuilt' lever shock that leaked before fitting back on the car. It has become disgustingly obvious that this shock was never rebuilt. The photo shows the seals are really old with old dirt and rust stuck to them. Check out further images of this shock below. The shock fiasco is now holding back the project. They were sent for rebuild way ahead of when needed to avoid this! 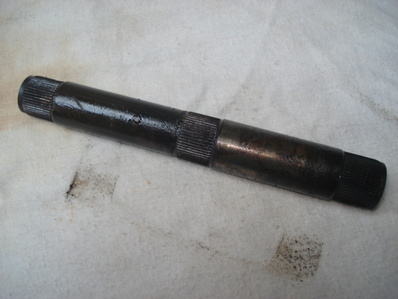 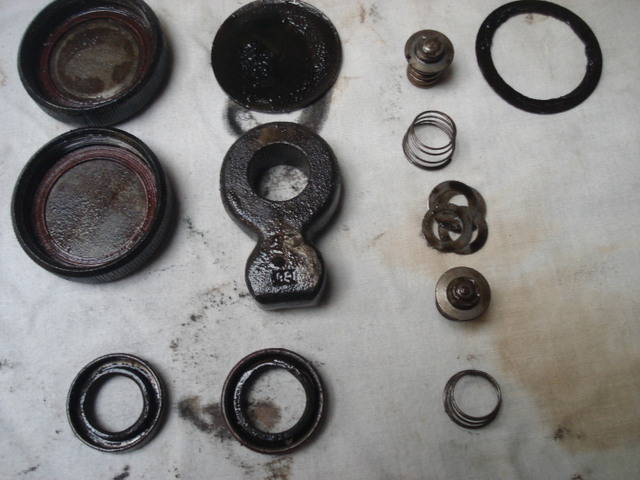 The second lever shock has been looked at and it is obvious why it was stiff. The bushing is seized onto the shaft. Also the spline is damaged and shows considerable rust. See pics below. 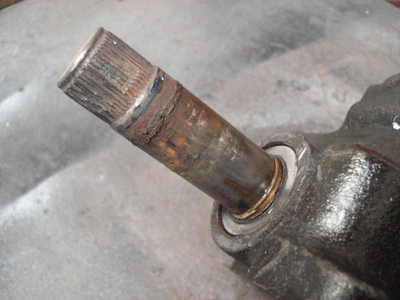 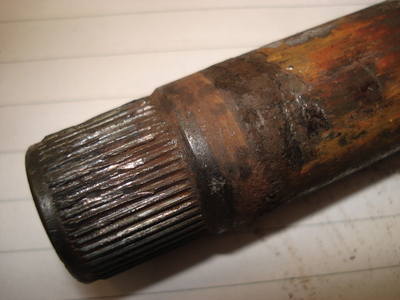 There is evidence of this one being pulled apart but this was decades ago. Cars Inc. oldbuickparts.com. Stand by their man as they know how good his workmanship is. So I thought I would share with everyone what great work he did for me. The only work done on my 'rebuilt' lever action shocks through Cars Inc. was an external clean, a bit of paint and filled with hydraulic oil. They have not even been looked at internally!